Our Motto:  COMMIT. TRAIN. PLAY
Premiere Tennis Lifestyle Brand that builds active tennis communities within the luxury resort facilities and private clubs they partner with. ELITE RACQUET SPORTS has been one of the pre-eminent and most well respected tennis & sports management companies in the United States. The company has a long- established reputation for providing unsurpassed levels of service, meticulous attention to detail and an ability to satisfy the most reputable facilities. Its extensive management and operational experience has been dominant and a great contributor to the tennis industry. Whatever the unique needs of the club, Hotel or private facility, Elite Racquet Sports can provide the solution and management to ensure an efficient, successful and profitable venture. Offering Tennis Services, lessons and custom tennis orders for Private Clients, Hotel Guests, Private Groups, schools and organizations. 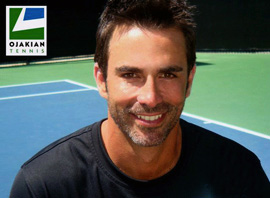 USPTA California Pro of the Year Chris Ojakian is a celebrity tennis pro and the Executive Tennis Director at Elite Racquet Sports.  Chris has been a member of the United States Professional Tennis Association since 1990 and was the 2010 District Pro of the Year in Southern California.  He is the youngest person to receive a USPTA 1 rating in New England.  While receiving a marketing degree from the University of North Carolina, Ojakian was ranked 14 nationally in doubles.

Chris was a former National Speaker for Cardio Tennis, traveling around the world introducing this heart-pumping fitness class to several facilities and other tennis pros.  Ojakian has trained celebrities such as Diane Sawyer, Alan Thicke, Dustin Hoffman, Harrison Ford, Spike Lee, Helen Hunt and many others.  His Cardio Tennis technique has been featured in TV shows like The Biggest Loser, Chelsea Lately on E! Entertainment, The Tennis Channel, FOX and Telemundo, among many others.

He also organized and implemented one of the fastest- growing celebrity tennis  charity events in Southern California.  Called “Serve it up to End MS,” the event benefits the National Multiple Sclerosis Society.  Celebrities from movies, television, music join some of the biggest names in tennis every year to participate in this event.  Celebrities who participate include Tracy Austin, Matthew Perry, Gavin Rossdale, Michael Chang, The Bryan Brothers, Alan Thicke, Brody Jenner, and many others.